David Blumenstein is a senior service designer in Melbourne. He does comics and graphic journalism for outlets like Daily Review, The Guardian, The Nib and SBS Comedy. In 2012, he co-founded Squishface Studio, Australia’s first open comics workplace, retail space and classroom. He’s currently deputy president of the Australian Cartoonists Association. 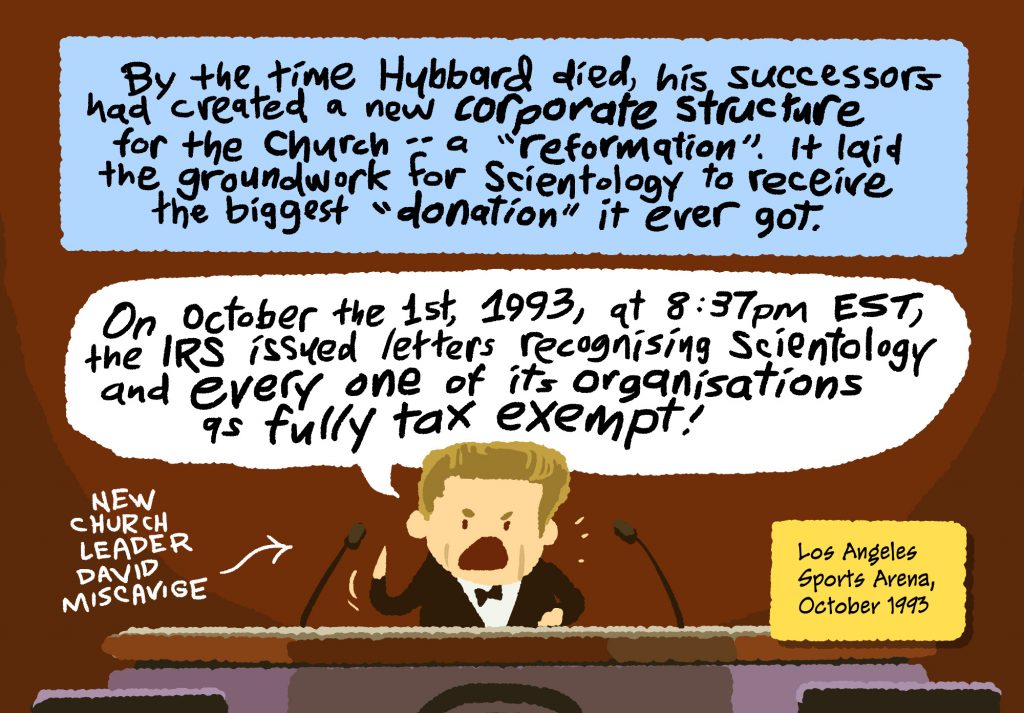 Q: Where do I see your comics? What’s “graphic journalism”?

You can go here for my comics. I used to do lots of printed books and minis, but lately I do more stuff online.

“Graphic journalism” would be a short way of saying “long non-fiction comics that aren’t all about me”. I’ve done lots of humorous work in the last ten years, but increasingly I like doing longer, researched pieces, and sometimes even find published homes for them.

My book, #takedown: My evening on a pier with pick-up artists and protesters, was released by Pikitia Press. It was about me trying to infiltrate a lecture by notorious “professional pickup artist” Julien Blanc.

I also like this piece about Scientology for The Guardian.

And Free Money, Please is something I’m very slowly turning into a graphic novel. 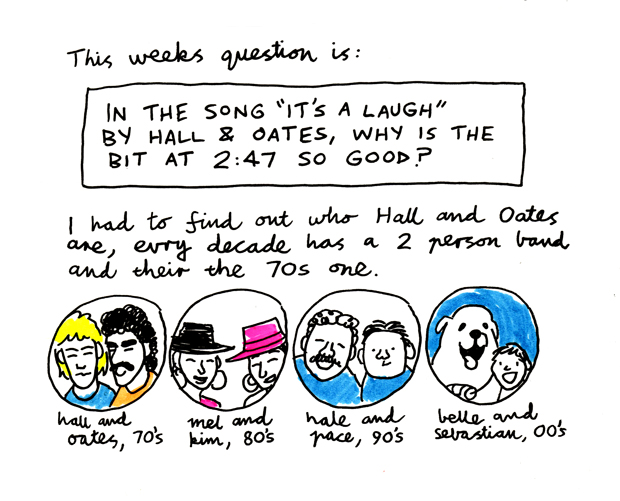 Q: Is your brother Tristian real?

I won a Lord Mayor’s Creative Writing Award for The Bolt Report, a school report by my younger brother, Tristian. It annoyed professional ghoul Andrew Bolt enough that Tristian ended up with a weekly column on arts website Daily Review.

Following Trump’s presidential win in 2016, Tristian switched to being a Young Conservative and is now pitching bad poetry about “freedom” to The Spectator and Quadrant. I don’t think they’ve ever published him.

Q: Squishface is cool! I went past the studio and you’re gone, what happened to you guys?

In 2012, I was one of the artists who opened Squishface Studio (including my wife, Sarah Howell). We were an “open studio”, in that anybody could wander in off the street, and often did. About fifty artists became members over the next nine years, sharing desks and working on their own art. We held regular events and hung out and it was a lot of fun.

In 2021 our building was sold, and the new owner took over the shopfront for his own use, so you won’t find us at 309 Victoria St any more.

In early 2022 we set up in a new space (Wharf St, ground floor, inside the District Docklands shopping centre), and we’re there now, but we mostly open for events like our regular drawing nights. Join us on Meetup to keep across when we’re doing things! 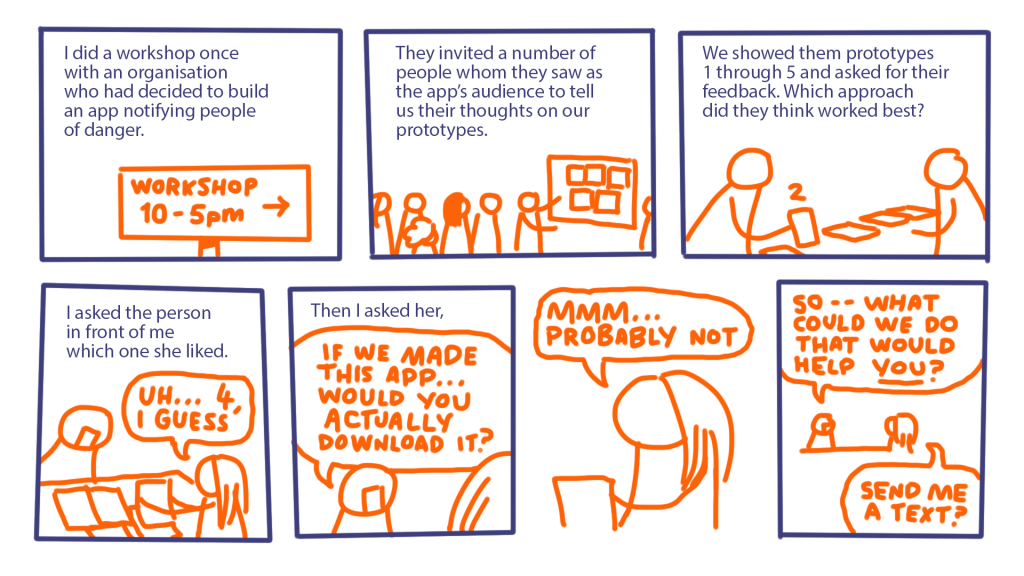 It kind of depends on where they work, but, to me, a service designer’s job is to have a bird’s-eye-view of an entire organisation’s services and map out the kind of experience their clients/users/customers are going to have when things are running as per usual. This means interviewing, observing and doing workshops with the people providing the service (front line staff) and the users themselves. When I do it, it involves a lot of drawing (because telling rough little stories seems to make things a lot clearer for people than big long PowerPoints).

I also think service design is like being Lt. Columbo.

Doing design work like this has influenced me to make my comics more simple and easy to read. 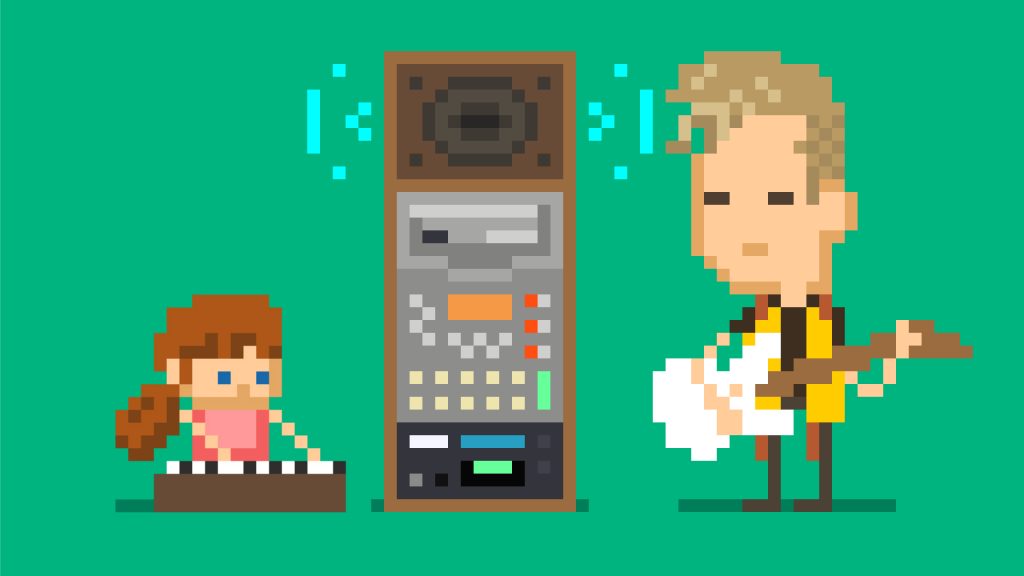 Q: Didn’t you used to do animation?

I did! I made an animated short called Herman, the Legal Labrador, and that led to an animation career via a show called Dogstar. Eventually I did animation and storyboards for shows and ads. I also spent years pitching an adult animated cop show called The Precinct!

I kinda burned out on series animation, and then an adult animated cop show got greenlit but it wasn’t mine, so my enthusiasm for animating collapsed. Then I started working in graphic scribing and design, and liked it better because it’s more physically active and uses more of my brain.

I got back into animation during covid! I’ve been doing bits for my own fun, such as this music video about wee-wee, and I have a few clients I really like who I do stuff for when I can. 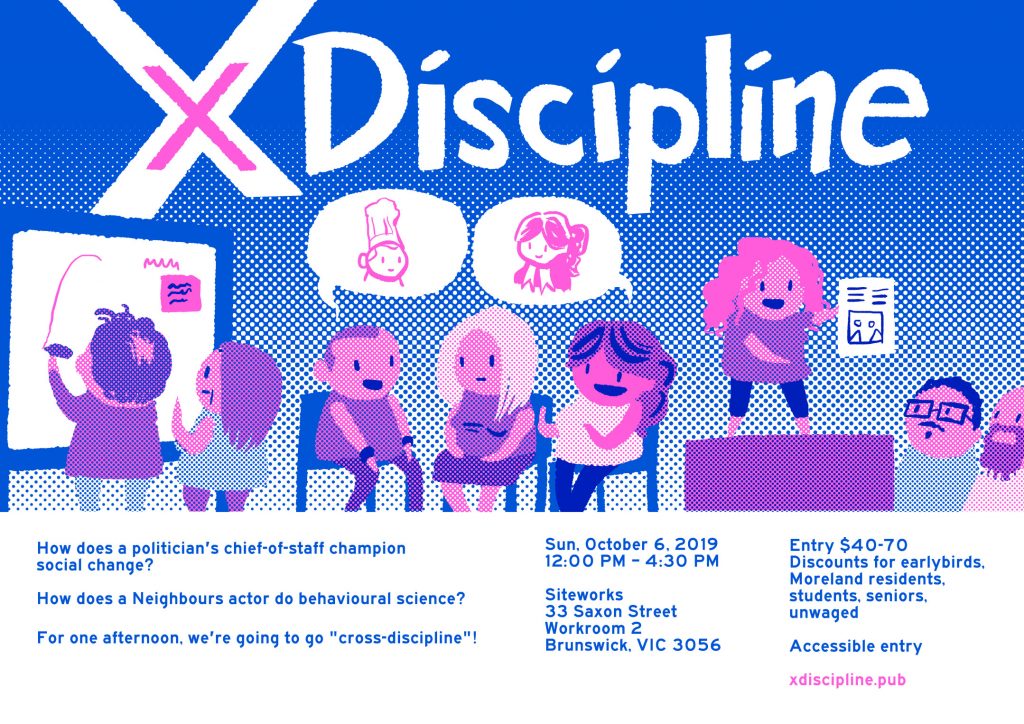 Q: Are you going to do another [ Squishface exhibition | xDiscipline | Pitch Face | etc ]?

If I didn’t do another one it was because I was tired, or I learned enough from the first time!

I don’t think of myself as an arts administrator but I have conceived/put on quite a few community events, starting back at the National Young Writers Festival, then Squishface Studio ones like our Coaster Shows and the Troubled Comics exhibition and more recently design-related workshops like xDiscipline and Drawing for Story.

Unfortunately, I like Doing the Thing and am bad at Following Up the Thing or Promoting the Thing. There’s just always a New Thing, you know? Also, I mostly Do the Things to meet other people and covid wrecked that aspect.

I’m starting to get back at it with Squishface, and through programming the ACA conference. 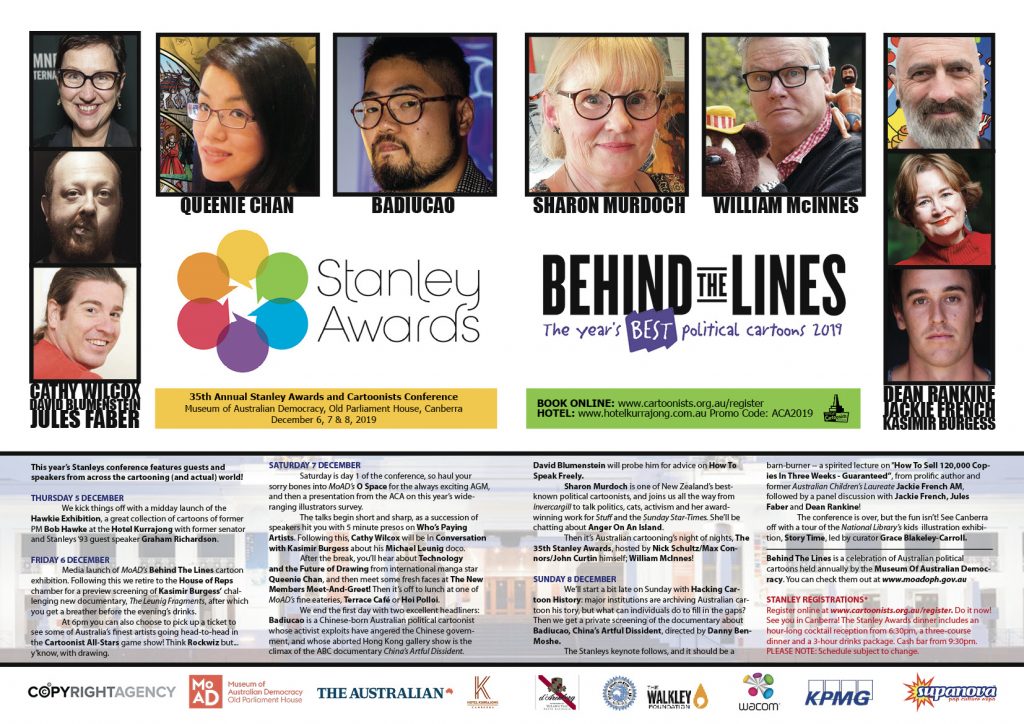 It’s the oldest cartooning organisation in the world. In 2019 we mounted a research survey of 250 artists around Australia. They said “Hey ACA, act a bit more like a union by giving us advice and helping us on issues of rights/pay/legals”. They also wanted us to assist with professional development and to promote our industry.

In 2020 we revised our “recommended rates” card to make it clearer what types of labour “cartooning” and associated work actually consists of. In 2021 we convened a youth and new members committee to advise the ACA board on directions and actions for the ACA to move toward. In 2022 we worked more closely with our industry union, the Media, Arts and Entertainment Alliance (MEAA) to supply them with information they can use to better represent cartoonists and illustrators.

As deputy president I’ve programmed the last couple of conferences, and I run the committee meetings when Cathy Wilcox has a sniffle.

Can I contact you? Where can I buy your work? Will you draw my children’s book?

I hate selling things so I don’t do it. Take my comics and read them; God bless you. If you read them on zco.mx you can even send me a dollar if you liked them.

The best way to hear about interesting things I’m doing is to get my newsletter. More than one person* has told me it’s the only email newsletter they actually like reading! You can sign up at the top right of this site.

I can’t tell you I will draw your children’s book, but I can tell you I definitely won’t do it if you’re not subscribing to my fabulous newsletter.