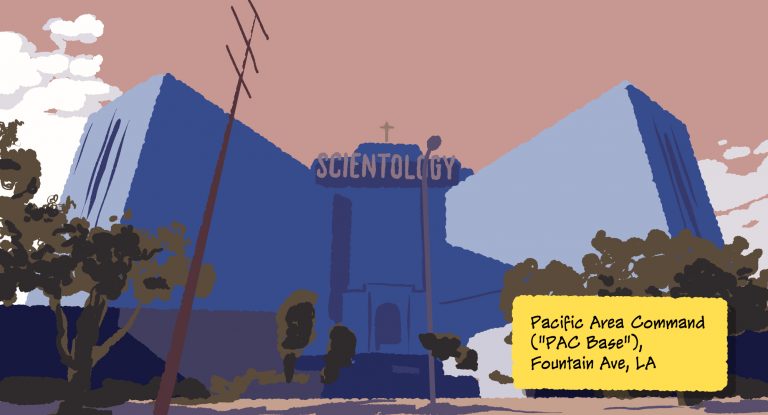 I wrote (and drew) a piece for The Guardian about the Church of Scientology, and specifically its Ideal Orgs — over time, they’ve been replacing their standard “org” buildings with larger, fancier ones.

I talked to Scientology critic Jeffrey Augustine about why this is happening, and explored why Los Angeles has been so important to the Church, and its founder, L. Ron Hubbard.

When you write about Scientology, you not only realise how much you don’t know (it involved a lot of research and fact-checking, though I’ve been a fairly attentive observer for 20 years), you also realise how deep down the rabbit hole you can fall.

There was so much stuff I wanted to cover but couldn’t — my editor at The Guardian deserves a lot of praise for keeping the piece “on course”.

I’d also like to thank my local interviewee, quoted at the start and end of the story, and Jason Chatfield, without whose invitation to attend NCS Fest in California last year I couldn’t have written this piece.

I wanted to suggest some further links for people who don’t know much about the Church of Scientology — it’s easy to get tangled up in their terminology, and in the many fascinating side avenues, as I have!

Tony Ortega was the editor of New York’s Village Voice, and now writes full time about Scientology and related topics. His archive of work on the subject is vast, and it’s impossible to pick one story that represents it, but a couple of memorable ones include his time with two private investigators offered “jobs for life” by the Church (and who did spend over 20 years working for them), and the leaked audio of a woman being officially shunned by the Church, and therefore in danger of losing her family.

I thanked Tracey McManus and the Tampa Bay Times at the close of my piece because that paper has broken some of the biggest stories regarding the Church (they’re based near Clearwater, Scientology’s “Vatican City”). Tracey and Eli Murray recently created this multimedia piece on the takeover of Clearwater’s downtown area, but the Times is best known for its piece The Truth Rundown, a multi-part series which introduced the world to David Miscavige’s management style (including “The Hole” and “Musical Chairs”).

Jeffrey Augustine’s site The Scientology Money Project goes deep into the weeds on the Church’s financial matters. His podcast, Surviving Scientology, is more accessible, and there are many fascinating interviews, his interview with Jesse Prince, a former senior Church executive, being one of the most accessible.

When you’re ready for a dive into the minutiae of daily life in Scientology, I suggest buying Marc Headley’s book Blown for Good. Marc is clearly someone with a great sense of humour and an anti-authoritarian streak, which makes his story both entertaining and horrifying. If you ever wondered how “normal people” end up in Scientology, read this.

Leah Remini’s recent TV series Scientology and the Aftermath has done a lot to bring the stories of ordinary people, damaged by their time in the Church, to a wide audience. It’s also led to the creation of the Aftermath Foundation, which helps those leaving Scientology (who often have little or no money or contacts outside the Church). I’m not sure what the best way is to see all of the show in Australia, but A&E is streaming it to North Americans at the link above, and season 1 appears to be on SBS On Demand.

Finally, the life of L. Ron Hubbard is best covered by Russell Miller’s classic Bare Faced Messiah, the book I downloaded and read in ASCII text format 20 years ago (it was out of print at the time), which made me say “Holy crap, if even a third of this is true, L. Ron Hubbard had the craziest life ever”. Judging by the Church’s response to the book, it’s all true.

If you are thinking of leaving Scientology, you might want to read these instead: