So I’ve mentioned that I’m working on a new music short film called John Howard’s Knees, about the ex-PM and his bewitching patellas. 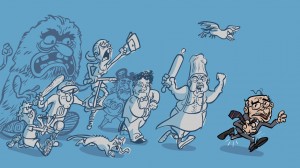 Everybody wants to smash ’em!

We had our very first proper recording session last month. Prior to this, I’d recorded a fairly crap demo track featuring me singing the song over a lush bed of cheap Korg synth (Poly-800, if you want to know).

The idea with this session was to get two people in. One is my friend Sue, who’s an opera singer. I wanted her to take a crack at singing some of the song so I’d have something less nasty than my own voice to listen to on the demo. Also, I’d never heard her sing and I reckoned she might well be awesome.

As it turned out, she was (and is)! So she’ll be on the final track. She did an amazing job in the studio considering he had a cold, and this was our first rehearsal, and neither of us quite knew how the melodies/harmonies were supposed to go. Nao, the recordist, helped us out a bit with this (thank you, Nao).

The second person is sort of a hero of mine; Tony Martin (of The Late Show, Martin/Molloy and Get This, not Blue Murder, Wildside and The Interview). He agreed to drop in and be the voice of John Howard in the fillum.

I felt a bit shitty for asking him to come and do some schtick he’s been doing for twenty years (you can hear a bit of his musical Howard here!), but hopefully seeing his Howard as a cartoon character will be a bit of fun for him.

One challenge will be matching the design to the voice. The Howard impression he does is more a characterisation than a true “accurate impression”. If I was to compare it to a cartoon, I’d say his Howard is a Tandberg. So my Howard design is along those lines. It might need to be a little simpler even. I’m obsessed at the moment with the idea that maybe his mouth goes “vertical” when he yells, but this is a rip on Ren from Ren & Stimpy, so I may chuck it.

Anyway, the session went well, and swiftly, and, as with my recording of Shaun Micallef a few years back, he was swift and good-humored. And I kept things professional. I even did a dialogue list and remembered to get lots of little “uh!” “weh!” “yaaa!”-type noises out of him to use while he’s being chased, etc (this is important).

I didn’t get any session pics! I had two hours off work and we packed ’em with recording. Next time.

Before I get the singer/s into the studio to do the song properly, I’m going to do a MIDI file with the melody and harmony lines in it so they can study it beforehand. Will also record the other actor voices soon.

I’m thinking of not bothering with a storyboard for this film.