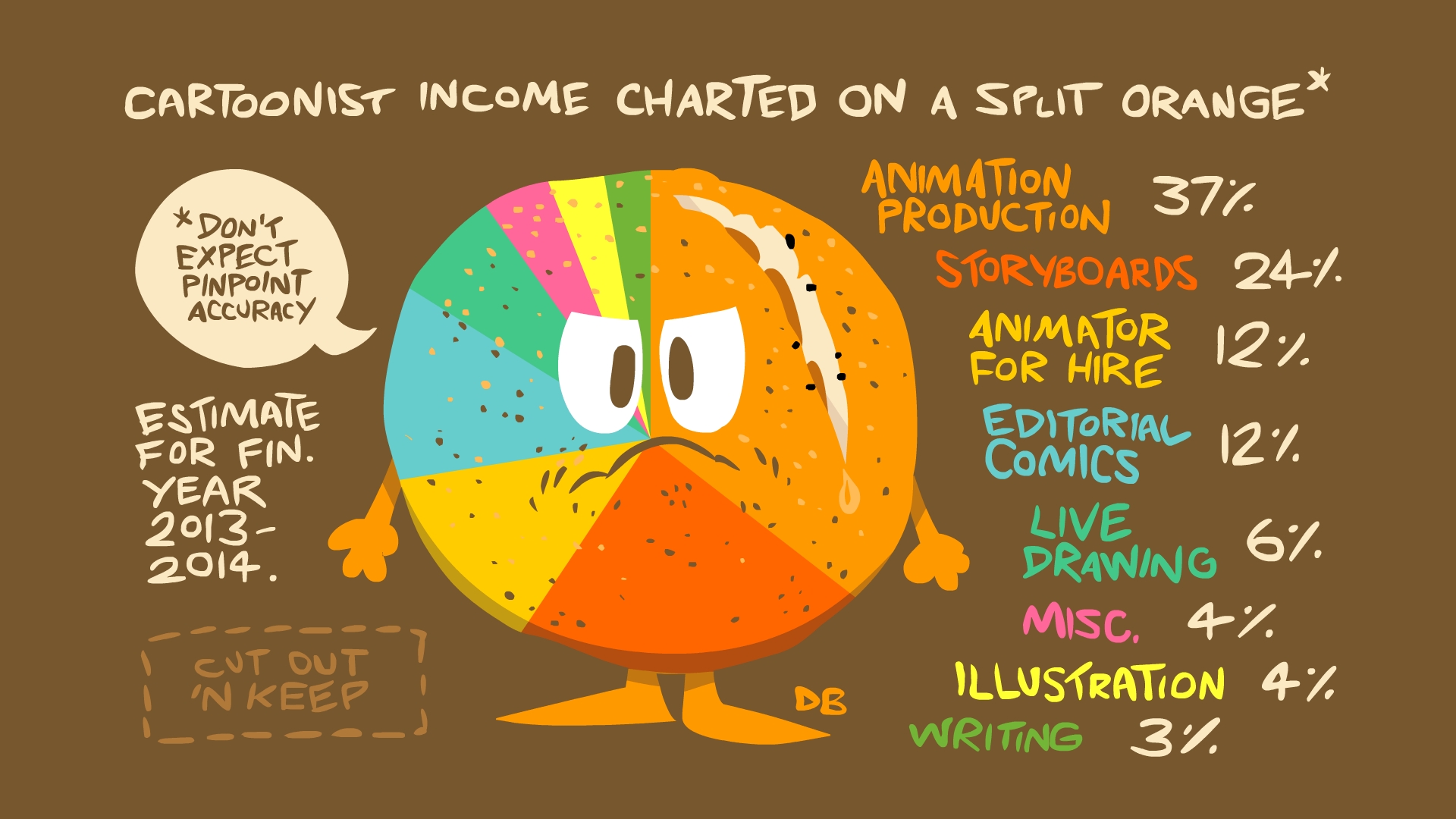 On Wednesday I started doing my taxes by tallying up my income for 2013/14. Because this is so exciting, I live-tweeted it.

This year’s count is unusual in that, most years, I am employed on a full time contract for at least part of the year. This one, not.

Taxes are a bit different for me as an artist because I usually don’t have only one source of income in a given year. I do various sorts of jobs for different kinds of clients, big and small. Sometimes I work directly for the client and sometimes there’s a middle man. Sometimes I quote for a job and sometimes I’m offered a sum I can take or leave. Some of my income (not much) is from selling my own books.

The other intrigue will be in determining what percentage of my income came from comics this year! Normally negligible. #politicslive — David Blumenstein (@nakedfella) June 25, 2014

In the past, most of my income came from extended contracts working on things like kids shows (Dogstar, for example) as an animator. It functions like a full-time job but has a set length (up to a year, in my experience). More recently, I decided to “go freelance”, and to try to find more work I want to do rather than accepting animation jobs because they were available.

In the last year, I have been paid to produce editorial cartoons/comics, which is a new and welcome development, and which might not have happened had I continued animating for kids shows full time — writing comics uses a lot of brain/thinking time which is hard to come by — see that video where John Cleese talks about creativity for a good idea of why.

You can, of course, follow this count and “join the conversation” at the hashtag #davidcries — David Blumenstein (@nakedfella) June 25, 2014

I have a very nice accountant, but I usually have to take some time to explain to him what exactly I do to make a living so that I he can understand why I want to make a claim for a deduction. He’s used to doing tax returns for people with one job. I’m confusing — not only did I have a couple dozen jobs this year, there are about a dozen distinct types of job!

When I did my taxes for last year, he asked me what my income would look like in the following year. Silly rabbit! I told him I had NO IDEA. That’s why it’s so very exciting to tally it up once it’s over. Here’s the result:

The majority of my income came from producing animation (creating whole animated pieces from scratch, often involving helping with script, storyboarding, design of characters and background elements, then animation, editing and sound). These are usually, but not always, ads or corporate “explainer” videos.

I also did a lot of storyboarding this year. I like taking on storyboarding jobs because I get to draw and because I’m more interested in storytelling than in making beautiful animation (which can get quite “bitty”, mathematical and obsessive). I’m becoming known more as a board artist, which is good because once you’ve spent years as an animator, it can become hard for people to see you as something else.

I’m still doing animation for hire, where I am given a storyboard and I animate to it using pre-built characters. This makes a nice change from other kinds of work, but I prefer not to be doing it all the time.

Before last year, I’d never really done any editorial/political comics, but this year I did, for The Guardian, for Crikey and for The Lifted Brow. I hope I can continue to do this sort of thing, because the period I spent doing it regularly for Crikey was excellent fun.

Another new thing is live drawing, which comes in the form of graphic recording for conferences or mural-making (and isn’t always “live” — sometimes you take a bunch of info and draw it up in a closed session). I love this work. You draw, tell a story and it’s over.

Miscellaneous income is what it sounds like. Examples this year would include arts festival guest fees, sales of original art and an art prize I got.

Illustration is anything I’m paid to draw that’s not for an animated project or a comic. I don’t have much illustration work because I’m less confident in my drawing ability than my storytelling ability — so I don’t pursue this work as much as I should.

Writing is also really new. I’m writing for an animated series at the moment and it will hopefully continue.

THE COUNT: Have bested my income from 2012/13 – just. It was not my best year and neither will this be! Nevertheless not too bad #davidcries

EDIT: Here’s similar breakdowns by Ryan Estrada and Dorothy Gambrell! They gave real numbers, which I was too shy to do. Know of more?