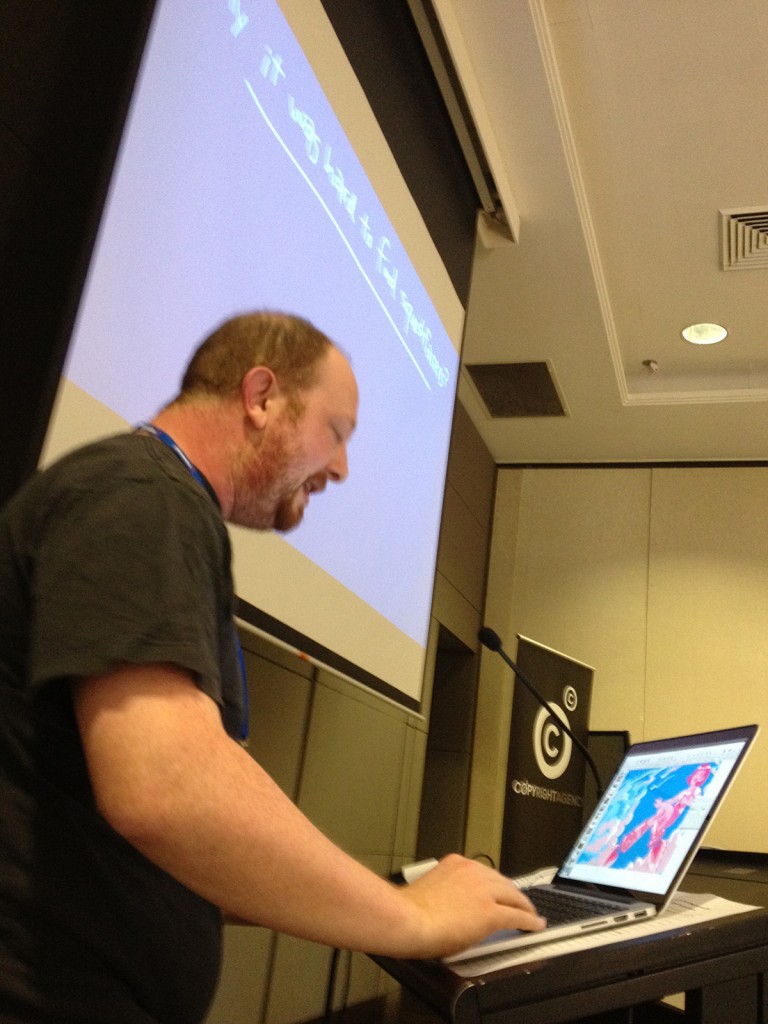 Hi! This is part 2 of my report on the Stanleys conference. Part 1 of this recap is here.

I had some interesting conversations with people after I spoke; I’m sure Tim did too. They were intrigued by what we’re doing at Squishface, and often this led into conversations about the ACA, and what and who it’s for.

There’s a number of interesting organisations which shine a light Australian drawing to various degrees, some of which would be Illustrators Australia, Just Another, the Jacky Winter Group, etc, which are more illustration-oriented than the ACA is; the ACA is more specifically about cartooning.

There’s a lot more places for a prospective cartoonist or illustrator to learn and showcase themselves nowadays than there were even when I left high school in 1997, so the very hard-working guys who run the ACA put a fair bit of that work into keeping it relevant.

Jason Chatfield’s talk, The Importance of Being Online, could have been called “Look, Idiot, Your Website Doesn’t Work On Phones”. It was a good talk. “Plugged in” as I am to web and social media compared to some in the room, I still don’t have a site that works great on a mobile device, because I’m a dope.

I was EXTREMELY surprised to win the “best caricature of the day” award for the attempt at Paul Giamatti above, but I’ve got the portable hard drive I won right here, so it must have happened.

I’d taken every opportunity to ask the attendees to draw on coasters for Squishface’s Coaster Show (opening Sunday November 3 at Squishface, 309 Victoria St, Brunswick!), and we got a nice pile before the day finished up with Russ Radcliffe, editor of Best Australian Political Cartoons, who presented some of his favourites from the ten-year collection.

I’d met Jos Valdman before but I hadn’t connected him to the recent scuffle between a South Australian minister and a cartoon flamingo, so I was very pleased to congratulate him on his good work in attracting legal threats, something I’m slightly familiar with.

Once the day’s talks were over, I grabbed up my hard drive and pile of coasters, then wandered over to a convenient duck pond, where I chilled out for a bit and changed my shirt in preparation for the awards night.

The awards night was hosted by Peter Berner. He did a fine job and shares, with ACA President Jules Faber, a dry persona that says, “Here is a gag, there it went, I’m not underlining it for you, dummy”.

You can look up all the nominees and winners if you’d like — as far as I’m concerned the right people won, even and especially in the Comic Book Artist category, in which I was nominated. I was honoured to have been in the mix.

I’ve been to these awards three times now and my favourite part is watching the talented and modest Anton Emdin crumple a bit when he wins something. He won three statuettes this night and I swear he looked sadder each time. He deserves every bit of his acclaim, and I bet one day he’ll even believe that.

I had the fish. It was OK. I bet the chicken was nicer, though.

After the awards? I saw liquor and cigars, and Rob Feldman told a story about hiding from gangsters that sounded like it could have been written by Barry Levinson.

I didn’t get much sleep, but I can’t be kept away from a barbeque, so I was up early Sunday morning and got down to the hotel again for a couple goodbyes and a big fat sausage from Jules.

Jules wrapped his sausage in bacon and fed it to me.

Anyway, I also met Christophe Granet, who organised an ACA exhibition at Top Ryde City earlier this year. He alerted me to the fact that there’s a new Asterix book out, written and drawn by a brand new guy.

Then I rushed off to the airport! I got a plane back to Sydney with Ian McCall, Grant Brown, Judy Horacek and David Pope. Ian marveled at the fact that Mr Pope can fit himself into an economy seat. I thought they should suspend food and toilet service so he could lie down in the aisle.

Anyway, what a nice time I had. I go to these, and am a member of the ACA, mostly so I can hang around and talk shit with cartoonists, as if I don’t get enough of that in my regular daily life. The membership are a fine bunch of guys, and I make more friends each time I attend the Stanleys.

My great thanks to the ACA executive, all the organisers of the shindig and the other guests. I was very, very pleased to have the chance to speak to them all.