What it is to be a cartoonist 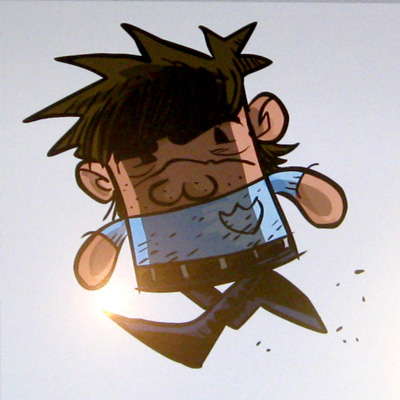 Cartoonists don’t travel through physical space, only through time.

Even when the cartoonist looks, to an observer, to be travelling; on a plane, say, or a train – they are bent over their Spirax #534 pad, scratching away at a sketch of a fellow passenger. Desperately trying to cram in another good strong line or eye-dot before the vehicle’s next violent lurch.

To the cartoonist, the trip is instantaneous, the time eaten by their drawing. It’s over and done with almost before they get on board.

The sketchbook is the history of the world, and the pen is a time machine.

Cartoonists have to be careful not to leap too far into the future. They can miss their stop.

For this reason, the time machine is best operated by a cartoonist with a honed sense of what is important. Usually, it’s the comic they’re drawing, but sometimes, like last weekend, it’s what’s going on around them. 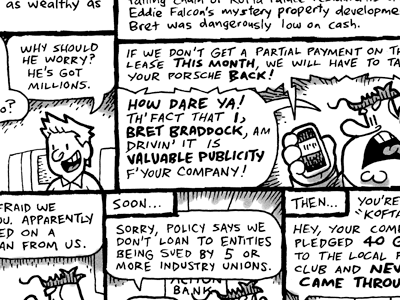 I attended the annual conference of the Australian Cartoonists Association, an organisation which was once called the Australian Black & White Artists Club, and which has been around for a little under 90 years.

Now that we live in a world where artists can afford to self-publish cartoons in colour — and do — they accept members who don’t make a living drawing newspaper editorial cartoons, although much of the membership have had occasion to draw a picture of Kevin Rudd with a knife in his back.

Other members do daily or weekly comic strips, the sort you might find in newspapers or magazines (including the cheaply printed ones with boobs in them. Skin mags are keeping more cartoonists employed than you can imagine).

I draw a weekly online strip. For free. Which makes me somewhat of an oddity among these professionals. I set my own deadlines. And I had a new strip to write and draw before the weekend was over, so I got cracking even as the conference’s first event got underway.

Anton Emdin presented an inking demonstration. He’s a fellow self-publisher whose comic books, when I discovered them eight or so years ago, stuck out as especially well drawn compared to other local fare. Funny, too.

Now he’s become something of a “golden child” of Australian cartooning, winning awards left and right and turning out extraordinarily accomplished illustrations for hire. I’m both pleased and galled to say that, like many talented people I’ve met, he’s a very nice guy.

But when he showed us a drawing he’d done just for kicks, in front of the telly, I remembered again what set his work apart years ago. He brings plenty to his commissioned pieces, but the stuff he does in his own time is what I want to see more of.

I don’t remember anything that was said at the children’s illustration panel. All I remember is Leigh Hobbs’ work. Somehow, some publishers are letting him be truly funny in front of kids, which, for someone with even a bit of experience in children’s entertainment, is surprising. 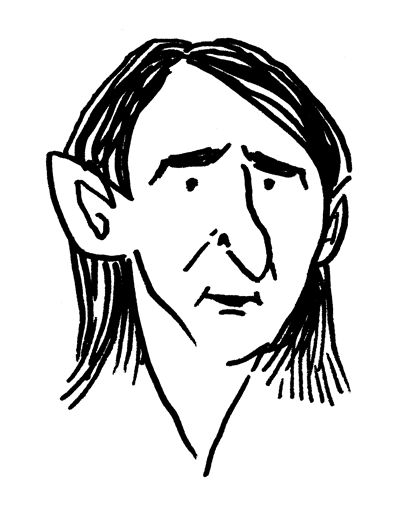 Reg Mombassa played with Mental As Anything, then created the most iconic art in the Mambo clothing brand, then designed a lot of stuff for the opening of Sydney Olympics (the best bits of which, apparently, were left out because of strong winds). Then he stood in front of us and told us all about it.

I saw him close up later on. He is a charming, funny man and he looks like he might be made of wax.

In a talk about a cartoonist named John Dixon, we learned that among his ancestors were Jeremiah Dixon, who, with Charles Mason, surveyed the Mason-Dixon Line separating the southern and north-eastern United States. This had little to do with John Dixon’s adventure strip, but was interesting nonetheless.

At the Australian Comics panel, Tim McEwen presented the work of local comic book creators. I think people in the room were wondering, “You mean they staple these books together themselves? Why? Do they sell them door-to-door?…” 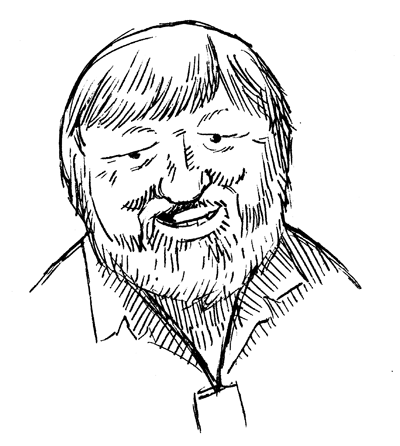 The conference’s special guest was Ron Cobb. A jaw-droppingly profound editorial cartoonist in the ‘60s and ‘70s, his expert rendering and extraordinary imagination dropped him into a career designing little things like “the spaceships in Alien” and “the time machine in Back to the Future” and “the stuff Conan the Barbarian wears”.

At one point, the U.S. government enlisted his futurist design brain in coming up with ideas for inventions that could save soldiers’ lives. With any luck, they used a few.

I was drawing while he spoke. I’m pretty sure he said that the “Hammerhead” character he designed for the Star Wars cantina scene is from a race considered the best joke-tellers in the galaxy. I love when background characters are way too thought out. 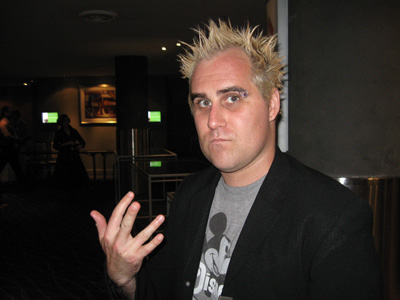 I spent the conference massively unbalanced; a very strong dizziness gripped me for the whole two days. It simulated drunkenness and probably made me more sociable than I would otherwise have been.

I chatted with several new cartoonist friends, including David Follett, Mark McHugh and Luke Watson (whose dad makes cheese). And I caught up with a few others I already knew, such as Matt Bisset-Johnson and the mysterious Troy Mingramm, an elusive sprite whose brand of unexpurgated slice-of-druggy-life stories have been missing from my life for a while.

Missed the AGM on the second morning. This was deliberate and unavoidable. I had to go to the pharmacy and ask for “anti-dizziness medication”. I don’t think it exists. Pharmacist offered me motion sickness pills, helpfully adding that they would do nothing. Didn’t buy jellybeans, either.

I powered into the Bret Braddock cartoon I needed to finish. Time slipped away. Roger Fletcher passed back original art from his strip Torkan. Realised the man handing them to me was comedian Peter Berner, apparently a cartoonist for many years. Maybe the inverse of The Age’s Andrew Weldon, who did comedy first then switched to cartoons.

Met Gary Clark; his strip Swamp has been going for thirty years. It’s great looking! How have I missed it? May not be published in Melbourne papers.

The conference catering was very nice. 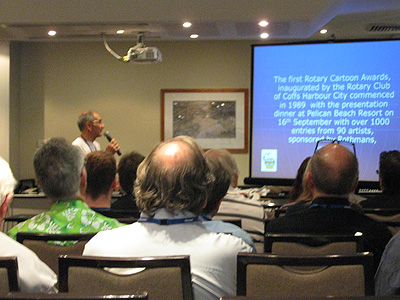 Graphic’s Jordan Verzar read out e-mails from Robert Crumb explaining why he decided to cancel his visit to Australia this year. Short version: “I and my family are frightened of Hetty Johnston, and there may not be enough cool old 78s for me to buy and really, I can’t be bothered”.

Jules Faber gave me an ACA T-shirt because I asked for one.

Hung out with David Follett and Jozef Szekeres before the big Stanleys awards night. Jozef’s portfolio is an astounding thing to look at. You rarely see Disney art and huge cocks in such close proximity. 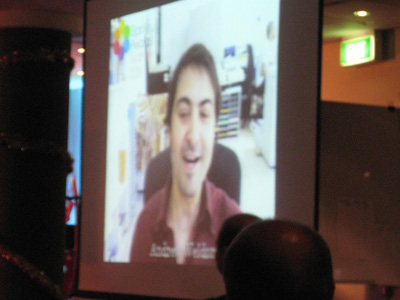 The conference culminates with THE STANLEYS, Australia’s cartooning awards night. It was slick. Reg Mombassa played slide guitar. For almost the first time during the conference, women appeared (not to discount the attendance of Alex Hallatt). There were tuxes with gold sneakers, and berets. I put my time machine away, for the most part.

Ron Cobb was at my table. I wasn’t able to have a conversation with him because it would have just been DeLorean questions punctuated by awkward silence. So instead we went with uninterrupted awkward silence, my sole contribution to his enjoyment of the weekend being to pass him a plate of grilled prawns he would not have had access to otherwise.

A nice young fella named Connor was there, representing the night’s charity, Westmead Children’s Hospital. Troy slipped him some of his NSFW-style comics, exhorting the youngster not to tell his mum. As far as I’m concerned, if you’re a 14-year-old suffering from crippling arthritis, among other things, you’re allowed to read naughty stories about Troy being picked up by a middle-aged woman on a cruise ship.

I bid on an original Tandberg in the silent auction, but lost to Mark Knight, who was gracious in his triumph. I think I was amusing to him in a hotel hallway, but I have no idea how. 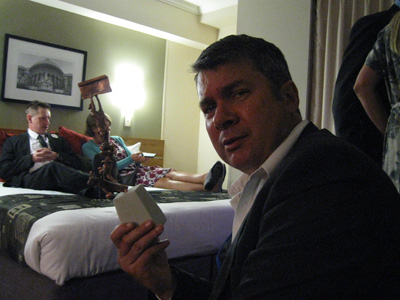 I touched Anton’s Gold Stanley, then wore a bunny hat. Then it was 3am and the after party got busted up by hotel security. I toddled off to my room.

It was a fun night.

The drinks machine in the departure lounge was spitting out free bottles to anyone who pressed a button. A little girl pressed buttons just for the fun of it and a Coke fell out. I got a mineral water, and justified the theft in my head.

I finished my comic on the plane home.

David Blumenstein is a cartoonist and animator who not only got a room upgrade at the hotel, but also got reseated in the emergency exit rows on both plane rides. Leg room!