Seeking a valid quantifier by which to judge your personal and artistic progress and likelihood of finding a method by which to support yourself in the arts?

Stupid internet contests may not be it! 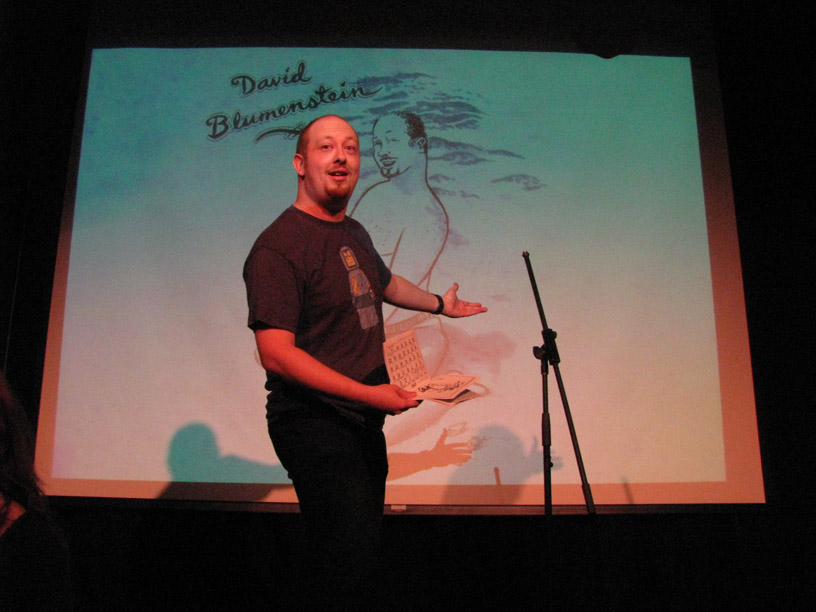 I’m conditioned for minimisation and self-deprecation. I don’t like talking big about my work. I’m very uncomfortable with the idea of broadcasting invitations, or bragging, or sales pitches. My impulse is to undercut them with humour, which generally renders them useless except as artistic exercises. Witness:

I am unable to let go of the nagging feeling that my work is CRAP and that pimping it is therefore ANNOYING TO ALL.

I don’t think it is bad to have this feeling. It stops me from being too much of a “networker” or politician. I would hate to be thought of as either.

My stronger belief that my work is GOOD and NEEDS TO BE SEEN. This is valuable because it allows me to get the work done in the first place.

Neither of these feelings will ever go away; I will always believe that what I produce is substandard AND that not enough people are paying attention to it!

I work too hard.

At the moment, between my weekly comic strip, my full time job and my many small and large animation/video projects, I animate or draw pretty much constantly, including while I eat or watch TV shows. When I’m not doing that, I plot and plan.

Look how much there is I could be doing. Look at the projects that remain incomplete. Look at my parents, who reckon I’m lazy.

(nowadays they reckon it’s more that I’m spending time on the wrong things. “Why don’t you have a mortgage yet? Mortgages are delicious”, etc).

In it to win it

I used to avoid getting involved in projects or jobs because I worried I might find myself overcommitted. One day, I realised I had never been overcommitted in my life.

Since then I’ve tried to pile up my plate as much as possible, and it’s worked out pretty well. Keeping busy is fun, but tiring. Especially mentally. You can become obsessed with all the opportunities you might be missing. You’ve got to be IN IT TO WIN IT!

Social media is keeping us all hooked to our devices, just in case we might miss an INCREDIBLY IMPORTANT STATUS UPDATE. The one that might change our lives!

(My life has, in fact, been materially changed for the better by a status update. So I’m not just being sarcastic.)

I just wanna be your “friend”

My friend Lisa Dempster runs a writers festival, is genuinely excited and passionate about writing and has a very lovely, bubbly personality. As a result, she can express herself very adeptly via social media. She considers it a leveling force.

She said (and I paraphrase) that Twitter allows us to not only watch well-known writers have a conversation publicly, but also to join in. Thus, we can feel we are close to those we admire, and converse with them on a level playing field. It is inviting, and welcoming.

I am not, by nature, so positive, and I often find Twitter depressing. Conversations I’m not part of. Events I’m not invited to. Fun other people are having. Wasn’t life better when I didn’t know what I was missing?

I hate entering social media-based filmmaking contests, even though I’ve done it several times and not been entirely unsuccessful. They feel cynical. They are promotional exercises. But they do give you opportunities you might not have had otherwise. So I enter worthwhile ones.

But I struggle with the self-promotion thing, which is crucial to getting VOTES or VIEWS or LIKES in contests such as these.

Shilling and begging don’t come naturally to me like they do to the networkers and politicians. When I do it, it sounds strained. Insincere.

I watched an arts festival talk at which musician Dave Graney said the following:

“People are fickle… you’re shamefully in the game of searching for their attention, and you know their attention’s going to wander. And it kinks you, and makes you into a fool…

You have to embrace being a fool, you have to embrace your own shameless mugging for people’s attention, moment by moment, like a… psychotic, you know, like Bert Newton, that kind of large, light entertainment psycho like that…

That’s the sort of scene you’re in. It’s perverse, but it’s recognised, and people are admired for their skills… it’s full of sham fakery and formalised stupidity…”

He was talking about performing on stage, but could easily have been talking about “performing” online. I see people do it (including myself) and I hate it.

If I was going to pay attention to the “rules” of online promotion in the hopes of getting MASS PAGE VIEWZ, this blog post would have to be 300 words long, max, include 7 “useful tips” about something and end with a “call to action” like,

What do you think?

For love or money

I wish I was more like Ben Hutcho, a comic genius who doesn’t seem to care whether or not anyone’s watching him work (though I know he does. Everyone does, other than the insane or autistic). He’s more “pure” in that way.

I will fight with it!

Go vote for my stuff in a thing.