I spoke on a panel at the Emerging Writers Festival last week and gave a little presentation on how I draft an episode of The Bret Braddock Adventures (a weekly webcomic about a lousy workplace you should really be reading).

They let me put up some images of the stages in doing one of these comics. I don’t reproduce them here to suggest anyone should work the same way, more because I’d never thought that much about my drafting process and was surprised at how much rewriting I do between roughs and final inks/shading. 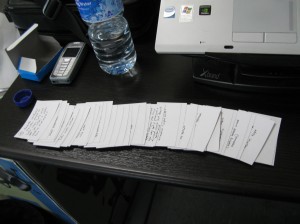 Before I started on the new series of Braddock comics I plotted out an arc on little cards. They’ll change and switch order and be added to over time. But I know I’m trying to get to a particular ending within about forty pages. 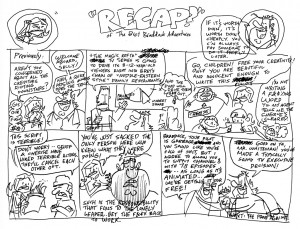 This is the rough of the first new episode, #43. It recaps the previous episodes. It’s badly drawn, badly posed, overwritten. It was partially done on public transport. This is how I write the first draft. 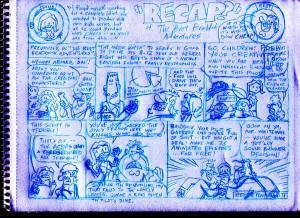 These are the pencils. I use a blue pencil so I can ink over the top later. At this stage I tightened up the layout and drawing, e.g., in panel 3 I’ve separated Bret’s nasty daughter out more from the other characters. In every panel, words have been changed (and usually cut), even his speech bubble at the top right. 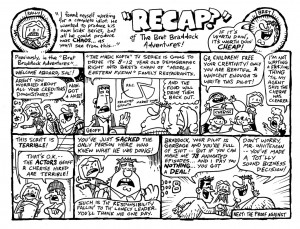 Inks are done, hopefully the drawings look OK. I used to fix everything digitally, until Ben Hutchings told me real men use paste-ups and liquid paper.

You can see in panel 2 of the roughs that Bret and Sally are facing 3/4 reverse. In the pencils I slipped and didn’t pay attention, and drew them looking more profile. Luckily I noticed and fixed this in the inks. 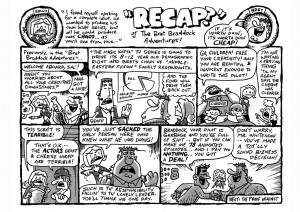 When I’m doing the grey shading I’m trying to smooth over any parts of the strip that aren’t clear, like making Sally pop out more in panel 6 by shading in the other characters. In that panel I’ve also tried to use the greys around the speech bubble pointers to make it clearer who’s speaking.

Thanks to Lisa and the EWF for getting me up to talk! And in such a swanky room, too.