About a month ago, we held an event called Bret Braddock’s Awkward Workplace Function as part of the Melbourne Fringe Festival. 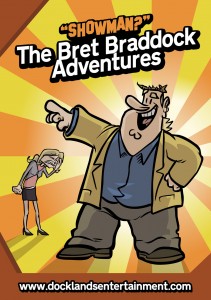 In case you don’t know, I do a (mostly) weekly comic strip over at Docklands Entertainment about Bret Braddock, a fictional entrepreneur who wishes to make quality children’s TV programming, and has absolutely no idea how. Check it out if you haven’t already. I just put Episode 35 online.

I expected to have finished the first 40 episodes by October, so I organised a launch party for the printed collection I was going to do.

Unfortunately I’d had to miss a number of weeks, so the collection didn’t happen. That made the Awkward Work Function awkward for yet another reason! 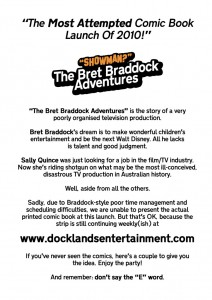 So the party went ahead without a book to launch, but WITH awkwardness, nametags and cake (also doughnuts, thanks to Greg Gerrand)!

Unfortunately (or perhaps fortunately, from a legal standpoint), there’s no photos or video of the event. But there are a few images I can show you… 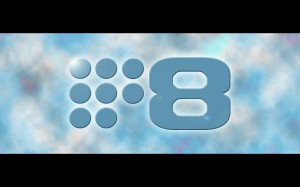 Our first speaker at the event was Gary Whiteman, Commissioner of Drama & Reality Drama & Reality Comedy & Reality Variety Light Entertainment at the Eight Network (portrayed by a moustachioed Bernard Caleo).

To reveal his big announcement would spoil the upcoming plot of the comic, but the man has bought some exciting things to show on Eight next year. 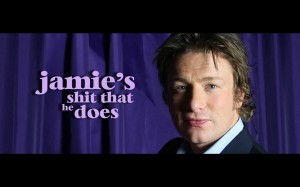 The next speaker was a gentleman named Daniel Cranberry (played by Adam Wajnberg) whose company, Cranimation, is very well thought of in the animation scene. 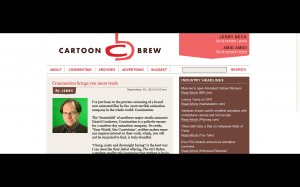 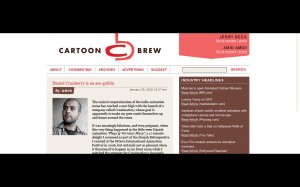 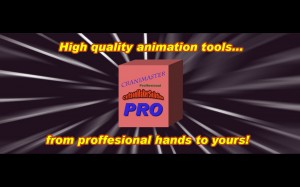 Daniel himself is the creator of an exciting new animation method. 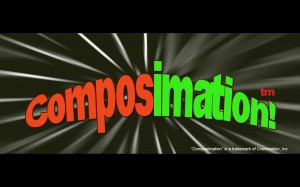 Again, his reasons for being there are best left to future Bret Braddock episodes to explain.

The final speaker was Reshelle Williams (portrayed with stunning “realism” by Susanne Daoud), a new addition to Docklands Entertainment’s management team. She distributed a number of special “prizes” to the gathered, nametagged, throng. 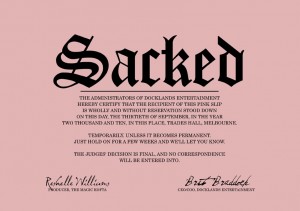 Sadly, Bret himself could not be there, although Reshelle relayed a rather fruity message he sent. It was about cake, and the question of who had bought the cake for the party, and had lots of swears in it.

Thanks to all who came, and maybe one day there will in fact be a collected edition of the comics, and a launch for same.