Been having more thoughts about the look and style of John Howard’s Knees (a cartoon I’m making about the former PM and his smashable knees). 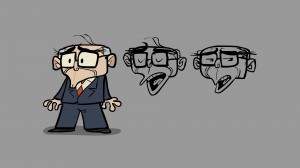 I quite like this version of him, as far as the balance between cartoon character and actual resemblance goes, but the style feels like a rip-off of something, not sure what (UPA?). Tried to do a version without black line. It looked shit.

Think this version goes better with Tony Martin’s voice; haven’t tried a test yet. Might do that next!

Originally wanted this to be a very simple project, almost animated straightahead without much planning (so I’d actually get it done).

Having an excellent voice for Howard and the singer/s has made that seem like a huge waste, that instead this should become really elaborate and I should put in the hard yards and get the animation as great as I can possibly make it.

I’m swinging back in the other direction now and feeling like maybe the sound being great will CARRY the cheap visuals.

Also, thinking of having the song lyrics appear as part of the backgrounds.