I’m putting together a new submission to SBS for The Precinct. We’ve actually submitted The Precinct to SBS twice before, but those proposed different show formats and lengths, and we’ve developed our ideas a lot more since then, especially thanks to our being funded to work on cross-platform strategy by the good people at Film Victoria and MEGA.

One new idea was a series of short interstitial cartoons, called Deadly Secrets of The Precinct, which would tell individual, self-contained little stories about the cops at The Precinct. There’d be lots of flashbacks to their seamy pasts, mostly to the 1980s. 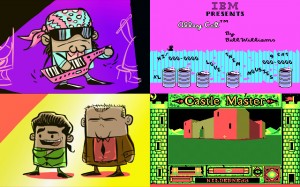 At some point I decided the ’80s flashback scenes should take on the CGA colour palette (to evoke a “look” of the time), so I did some art to show how that might appear (above).

I’m just popping that comparison into the submission now. The basic proposal is that we produce fifteen 90 second episodes of Deadly Secrets of The Precinct: twelve would appear on TV, in the Monday night or Saturday night “fun time” blocks, and three would be online-exclusive, to get people checking the whole series out on the SBS website.

Even now that everybody’s predicting the swift death of TV, I think it’s important we get an Aussie TV channel on board with what we’re doing.

I’m in favour of just making more new Precinct animation without support (and will soon, if I have time aside from the John Howard’s Knees film and other stuff), but I still feel strongly that there’s a place for Precinct on TV. Even on free-to air!

But at the moment, that place is only a minute or two long…

1 thought on “The Precinct — SBS submission”