Making a little animated trailer for another contest. This time it’s a trailer for a webseries based on me comic “The Bret Braddock Adventures”! 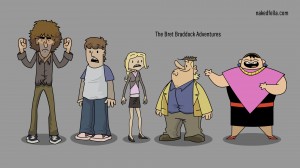 We had a recording session for this toon a couple weeks ago which went really well. In fact, it got quite heated and emotional, which I wasn’t expecting.

The story in “The Bret Braddock Adventures” is about a poorly managed entertainment company run by a grouse bloke/Aussie entrepreneur/ignorant dick named Bret Braddock. It would be incorrect to say that it’s based on a single company.

However, several of the voice actors involved (and myself) have had experiences similar to what’s depicted in the trailer. Recording these performances reminded me how raw you can feel, even months or years later, after having been mistreated at work.

At the same time it made the toon feel like even more of a worthwhile thing to do. So hopefully we’ll have it done in the next few weeks.