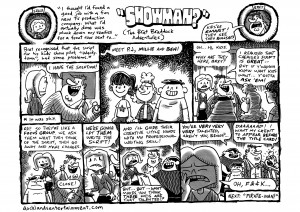 Having admitted I do the Bret Braddock Adventures comic strip, I’d like to invite you to the launch of the paper version:

Have you ever worked for a really lousy boss? Why not relive the experience?

The Bret Braddock Adventures is a weekly comic strip about a very badly managed company called Docklands Entertainment. They’re making a TV series called The Magic Kofta. Or are they?

The title (and everything else) changes daily. The show is being written by children. The director barely speaks English. Every possible decision is badly made by the boss, Bret Braddock. It could be your workplace.

It will be, if you come to The Bret Braddock Adventures book launch!

At Bret Braddock’s Awkward Workplace Function, there’ll be nametags, cake and slightly weird vibes. Win a lovely prize by submitting the worst workplace story! And you never know who might show up…

This is a Fringe Festival event, but just a one night thing. It starts at 6pm on Thursday September 30! The venue is the Bella Union, at Trades Hall (corner Victoria and Lygon St, Carlton).

A little bit more info is on the Melbourne Fringe site.

The Facebook event is here. You can of course also become a fan of Bret’s on FB.

Hope to see lots of you there!