I’m continuing to be interested in seeing this new show called The Good Guys, as it sounds a bit like a live action version of The Precinct. Also, it apparently features Bradley Whitford being silly, which is a great thing. 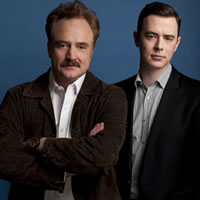 AV Club writer Todd VanDerWerff has written an article about the latest episode which includes a bit of insight I find interesting (as somebody who’s writing an ’80s-inspired cop show):

I think the issue is that the shows the show is drawn from – the cop shows of the ’70s and ’80s – have never really gone away. Their DNA is still prevalent in the DNA of most of the shows on the CBS lineup (not to mention numerous shows on the other networks). Burn Notice – a show that’s very similar to this one – succeeded because the shows it was gently mocking were shows that weren’t anywhere else on the lineup. For a show making fun of the cop shows littering the landscape to work, it would have to be more of an overt parody, and The Good Guys is really trying to have its cake and eat it too. It’s a parody of cop shows, but it’s also actually a cop show, where you can play along at home and try to see how all of the plots come together. Reading over that again, it sounds like a show I would really like, but there’s too much about the show from week to week that flails around for it to really start to build the momentum it would need to get more people saying, “You know this show you’re not watching? It’s really great, and you should be watching it.” It either needs to go more balls-out with the action or more balls-out with the comedy; it’s trying to play it too safe.