I went to COMICS CAMP a couple weekends ago, and since then I’ve been hard into (my day job, my freelance work, and also) my two current projects: a short film called John Howard’s Knees and the animated cop show currently known as The Precinct.

While I was on comics camp (which I blogged more extensively about over here), I spent some time putting my Precinct plans into comics form (sometimes I find it easier to think about stuff when it’s drawn rather than just written down).

The idea involves the funding and production of a series of one minute Precinct episodes introducing the characters: 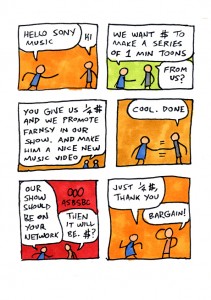 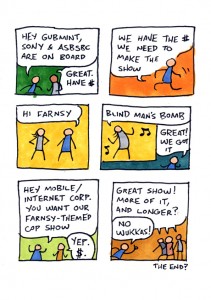 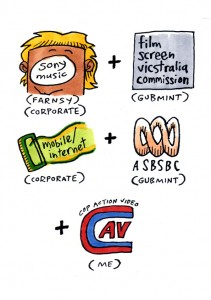 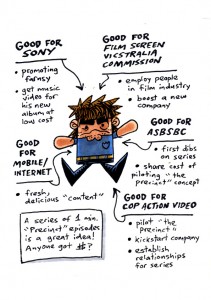 “ABSBSBC” refers to the two local TV networks I think the show is appropriate for, ABC and SBS.

I’ve been meeting with some smart, creative people I know and asking for their advice on this plan, which has been very helpful. I’ve also been asking about their ratio of businessy work (which makes the creative possible) compared to the creative work itself. In other words: how much time do you spend on the business end of things?

One successful producer of TV and film said “20%:80%” (in favour of creative). I hope to get to this ratio one day!