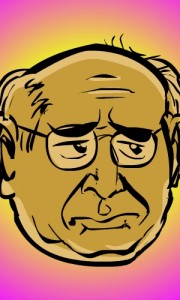 David Blumenstein, director of such acclaimed (?) short films as “Herman, The Legal Labrador”, “Kickin’ It With Mr Flig” and “Fart That Out Your Ear” (upcoming), is making a new short animated musical called “John Howard’s Knees”, and requires a singer.

The three minute cartoon will tell the story, in song, of how John Howard’s knees have been the target of constant violence all through his life. The uplifting tale culminates in his rise to PM, which becomes his knees’ salvation. This is not a political film. It is a celebration of one man and his two unstoppable knees.

We need a singer to perform the song, “The Ballad of the History of Trying to Break John Howard’s Knees”, which plays throughout the film. If you have a nice strong voice, good enunciation and are capable of performing “I Am The Very Model of a Modern Major-General”, you might be the person we’re looking for. Older, characterful male voices preferred.

Wonderful singers may contact David directly by e-mailing david {at} nakedfella {dot} com. The curious should check out previous work by Nakedfella Productions for an idea of how this might turn out…

“John Howard’s Knees” is an independent, unfunded fillum, but this is nevertheless a paid role.