It’s April in Melbourne again, which means one thing: I will miss a lot of good Comedy Festival shows.

Two that I won’t miss (because I’ve already gone to see them) are the Bedroom Philosopher’s Songs From The 86 Tram and Adrian Calear’s Code Grey: Adventures In Public Health. 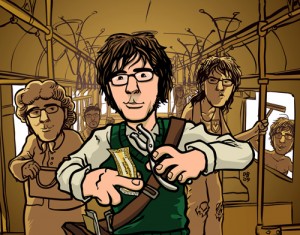 This is the Bedroom Philosopher’s third staging of this show, following a successful Fringe season and a less successful Comedy Festival (he broke his arm after the first week and had to cancel the rest of the run). He did get the Director’s Award for it, though.

If you’e missed it up ’til now, I suggest not missing it further. It’s a great low-budget musical/theatrical experience. Any Melburnian who’s ever taken public transport will get into it.

The album is coming out soon, too, but the show’s better live. 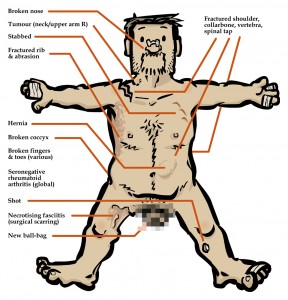 Adrian Calear has a true story to tell you about his illnesses and injuries. It’s an astounding story which gets really good at the point where he died. Twice. He came back to life because he wanted you to come see his Festival show, which he received a Moosehead award to produce. So see it!

It’s another bit of one-man theatre (with assistance from perennial Melbourne favourite Tim Harris). No songs, but there is nudity. If you can’t handle the nudity, there’s a cartoon of Adrian at stage left (see above) which you can concentrate on instead.

So you may have noticed I did the Bedroom Philosopher’s poster and Adrian’s illness/injury chart. I’m very proud to have been able to assist these fine men with their excellent work. One day maybe I’ll get to do some animation for a Festival show!

p.s. I also recommend Matt Elsbury, Josie Long, Tripod and Andrew McClelland, who I intend to see over the Easter break!