Theoretically, this is the “Precinct” production blog, but clearly, over four years, it’s become “David’s blog”. 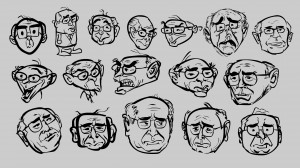 Since there’s not too much Precinct news at the moment, I will probably talk a bit in coming months about the little short I’m now making, called John Howard’s Knees. I’m VERY VERY excited about it for reasons I’ll go into later.

I’ve been reaching out a bit lately to various people I respect and asking them, basically, what I should do next. I don’t think it’s that “quarter-life crisis” I’ve heard about, more that I have a lot of things I’ve been meaning to do, there are a lot of outside considerations lately (that thing outside of cartoon-making known as “life”), and I want to be sure I’m spending my time on my better, or more useful ideas (those are not necessarily the same thing, which is part of what complicates things).

It’s a little bit frustrating to have put so much time into The Precinct while knowing the time could, perhaps, have been more profitably spent making lots of silly short cartoons. Luckily I still think The Precinct will be great, or I’d probably have chucked it by now and made a bunch of YouTube shorts involving robots, pirates, etc.

I’ve been working on comics again, which is a really nice thing. Having a regular outlet means I get at least one little creative thing FINISHED each week, which is important when the rest of your ideas involve time-consuming animation.

Anyway, John Howard’s Knees, as I think I mentioned in an earlier blog post, is about the life of John Howard (remember him?), and how people have always tried to smash his knees.

It’s basically a music video; visuals set to a song which tells the story. I’ve been recording a demo of the track using my trusty Korg Poly-800. I’d wanted to use the Casio CZ-1000, but the bastard doesn’t seem to want to take on wall power (needs batteries).

Frankly, it sounds underwhelming (pretty much all the Poly-800’s standard voices sound like a synth flute with varying amounts of squelch), but when it’s recorded and arranged properly, with real instruments, I think it’ll be good.

Maybe I should dig the HS-60 out of storage.