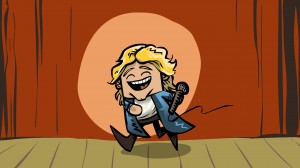 I spent 2009 planning and scheming and writing and talking and thinking. Lots of thinking!

This was all good stuff to do, in addition to the freelance work I had. But I did very little MAKING of STUFF!

I made a zine of some of my old articles and prose writing and took it to the National Young Writers Festival.

I made a little cartoon advertising a series of comics forums we put on at the Comedy Festival. I made it in one day and quite a lot of people saw it.

I made a few pages of comics and an interactive Youtube survey and a helpful example of lazy storyboarding.

But that’s all I made, and it’s not enough.

So 2010 will be a “making” year. I’m having a lot of trouble deciding what to spend time making. Some are things which I hope will move me closer to getting the Precinct animated series happening, and some are just things I’ve had “on the shelf” for years.

I’m going to try to do/finish many of those things this year!

I will need assistance with some of them, so my apologies if I come and bug you and ask for your help or advice; it’s only because