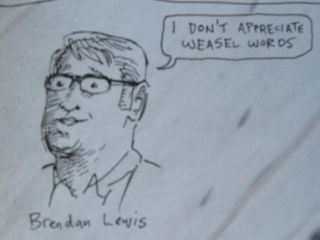 On Wednesday night our MEGA session was about “Financial Feasibility”.

In other words, we’d spent a couple months chucking ideas around in a friendly playpen, and our fearless leader Justin felt the need to dampen our enthusiasm by dropping some people with market experience on us.

One was the afore-pictured (is that a word?) Brendan Lewis, and I don’t think he’d mind my saying he was clearly there to tear the throats out of our concepts with his serrated teeth and then, blood coursing down his mighty jaw, roar up at the full moon like some sort of entrepreneurial werewolf.

I have thought about this, and am willing to acknowledge that an animated cop-themed Choose Your Own Adventure is not exactly the money-making Killer App the world is hanging out for. But I think there’s an audience for it.

So when Brendan chucked his now famous line, “Where’s the money coming from?” at me, I talked briefly about my interest in locating some companies with senses of humour for sponsorship/product placement action. We’ll make it funny, really!

The alternatives for funding being: looking for investment/grants, teaming up with a TV network and launching Die Trying as part of the series’ marketing, or just starting to write and build the game slowly and maybe attempting to flog some adorable, cylindrical merchandise. The idea of “crowdfunding” has been suggested, but I’d like to try this myself on a small scale before committing to it as a viable idea.

Anyway, I think I made it through the pitch OK, but I was a bit worse for wear afterwards.