Going along to these MEGA sessions and listening to the smart people talk about interesting things reminds me of two other slightly similar gatherings. One I’ve actually been to, and one I’ve just seen bits of on the web.

The one I’ve seen bits of on the web is called TED. Rebecca Clements put me onto it. It’s a big conference they have over in the USA every so often. Smart people (I mean, very smart people) address an audience of more smart people about a wide variety of topics. They film these talks and post some of them on their site, YouTube, etc. Some incredibly interesting talks. A few are “change the way you think” kind of talks.

Try this one. It’s my favourite.

The one I actually went to was a thing called XMediaLab. They describe this as a “digital media think tank and creative workshop”, and that is what it is. They bring lots of experts in various fields (relevant to digital media) to one place for a weekend and a bunch of lucky people with interesting digital media project ideas get to listen to them talk, then consult with the ones they like best to get the benefit of their wisdom.

I went to the Melbourne XML a couple years ago as part of my friend Katrina’s team. Her project “Girl Mechanic TV” scored a place, and I was along as the cartoony/animaty/designy guy.

It was an intense weekend. I was working Friday so I missed the “talks” day, but Sat and Sun were packed out with meetings with an impressive array of people, each with their own particular take on Kat’s project. A Canadian design lecturer (the other Martha from Martha and the Muffins) told her it needed to be more educational. An Indian venture capitalist told her it needed to be completely uneducational (and needed more “freaks”. He was a strange guy).

I guess the point of this post is, “try to listen to smart people talk if you can”. Even better if you can talk TO them as well. They all have their own agendas, of course. As long as you know what those are, you can learn shitloads.

Yesterday we spent the whole day at a MEGA session where we pitched our projects to business/marketing type people. 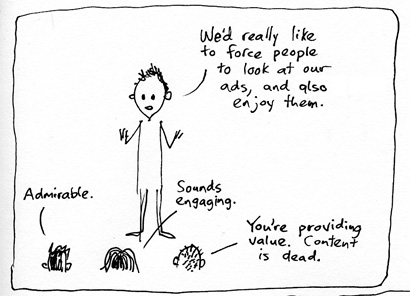 Some people’s ideas revolve around serving ads direct to your phone. Naturally, they went over well with the ad gurus. Personally, the idea of phone ads makes me wanna ralph. They think they can make it so the ads are so finely targeted that people will actually LOOK FORWARD to seeing them, as they’ll have such a good knowledge of what YOU THE CONSUMER wants to buy, they’ll only deliver ads you’re interested in.

I’m for this in theory, but I suspect it’ll be difficult getting consumers to hand over all this demographic info, and people in the future will probably continue to get lots of ads for Cialiviagrium they don’t need. 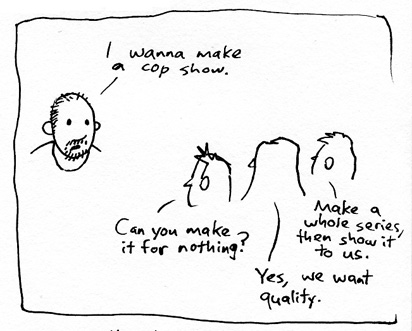 People don’t quite understand that animation is expensive. Even “cheap” animation. When I quoted the projected per-episode cost of our show, I think someone suggested that outlandish amount would HAVE to be blown on drugs — there’s no way a CARTOON could cost that much!…

It can. It does. The number I quoted was probably a tenth of a Simpsons episode, maybe a third of a South Park (our episodes are half the length).

Drew at Eskimo, whom we’re working on cross-platform strategy with, asked me the other day why I couldn’t just make a few Precinct episodes on my own time. He was being somewhat facetious, but was nevertheless after a serious answer. He wondered how much money I would have to be handed to go ahead and start making the show by myself.

The first answer is, I have just gone ahead and made some Precinct animation — this. I had help from a number of people. They worked, essentially, for nothing. I don’t want to keep asking people to work for nothing. If we can’t scare up enough money to pay people to work on it, maybe it’s not good enough.

The second answer is, I could (and maybe should) be working on just making the show myself. I am doing a storyboard for another Precinct short, but work on this has really dropped off since I started the new day job, and MEGA. In the past, I WOULD just have started animating. I did Herman that way. It took a long time.

But I really think The Precinct needs some production value, and some backing. It’s a nice, commercial idea. It looks cute and could get a reasonable audience if we did it well. Not to say I won’t do some more stupid cheap toons soon… like these.

But all the talk about DIY, cheapness and episode lengths has made me start thinking about another way of approaching The Precinct‘s production.

Which is the value of consulting with big-brained people! Thanks, MEGA and Film Victoria, for making that possible!