A couple weeks ago we put on what we called a “VERY SPECIAL THEATRICAL EVENT” for a small audience at Glitch. 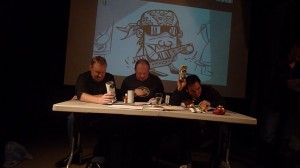 What this turned out to be was a live reading of one of our Precinct scripts — “Episode 6: Last Drinks”, otherwise known as “the ’80s flashback episode”, in which a young Sarge, Sandhurst and Ackersley are forced to team up as they try to bring down a noted Drug(tm) dealer.

We showed a series of images (flicked through by tech/fiancee Sarah Howell) which tell the story of the episode. There was also a bit of synthesizer action, ably triggered at just the right moments by tech/never been a romantic partner of mine Jake Zhivov.

The reading was performed by myself and co-writer Adam, buoyed to greatness by narrator Thomas Pullar and the excellent Melbourne comedian Matt Elsbury, who took over the role of Sarge at very, very short notice when Adrian Calear (Sarge’s regular golden throat) took ill.

You can perhaps also tell from the pics that we performed a little puppet show to go along with our multimedia antics. Adam made the Precinct characters out of soup cans, and everyone else was played by an array of toys we nicked from the studio.

We put this on for a couple reasons: we thought it would be fun (it was) and we thought it’d help the script if we got some feedback and audience response (it did). When you’re shut away working on scripts for months you start to wonder if they’re funny! We felt good when the kind audience laughed and applauded: if it’s funny as a haphazardly staged puppet show, it’ll be a lot better as a proper cartoon.

I highly recommend prodding actors into performing your works for an audience. Normally you don’t find out your dialogue sucks until you get into the recording booth.

We even called for a volunteer at one point to play Fallon, who tests out a bag of Drug ™ and delivers some startling news to our heroes. Famed comics broadcaster John Retallick gamely took up the challenge, even going as far as taste-testing our prop Drug(tm) bag (which was, cunningly, filled with cocaine).

Later, Adam and David drank lots, Adam humped a postbox and, the next day, came down with a nose-bleedingly bad case of swine flu (the two are unrelated). A successful evening. Maybe we’ll do it again sometime!