I’m animating freelance on one episode of an animated TV series. The way this works is that I receive an allocation of shots to animate, and refer to the storyboards for a guide as to how I go about it.

The board artist on this episode is lazy. The drawings are good (very good! better than mine would be), consistent, on model. But the characters’ posing is pedestrian, boring, useless.

Let me show you how the artist has interpreted one particular exchange. I’ve redrawn it and changed the dialogue so as not to embarrass the production or get me in trouble:

I think this is a representative scene from the episode. Essentially, any time an action has not been specifically noted in the script (i.e. “the guys jump across the river”, “Dr Frankenjosh raises his fist in anger”), the characters stand up straight, in a row, and hold out what I now call the “beggar hand” at each other. 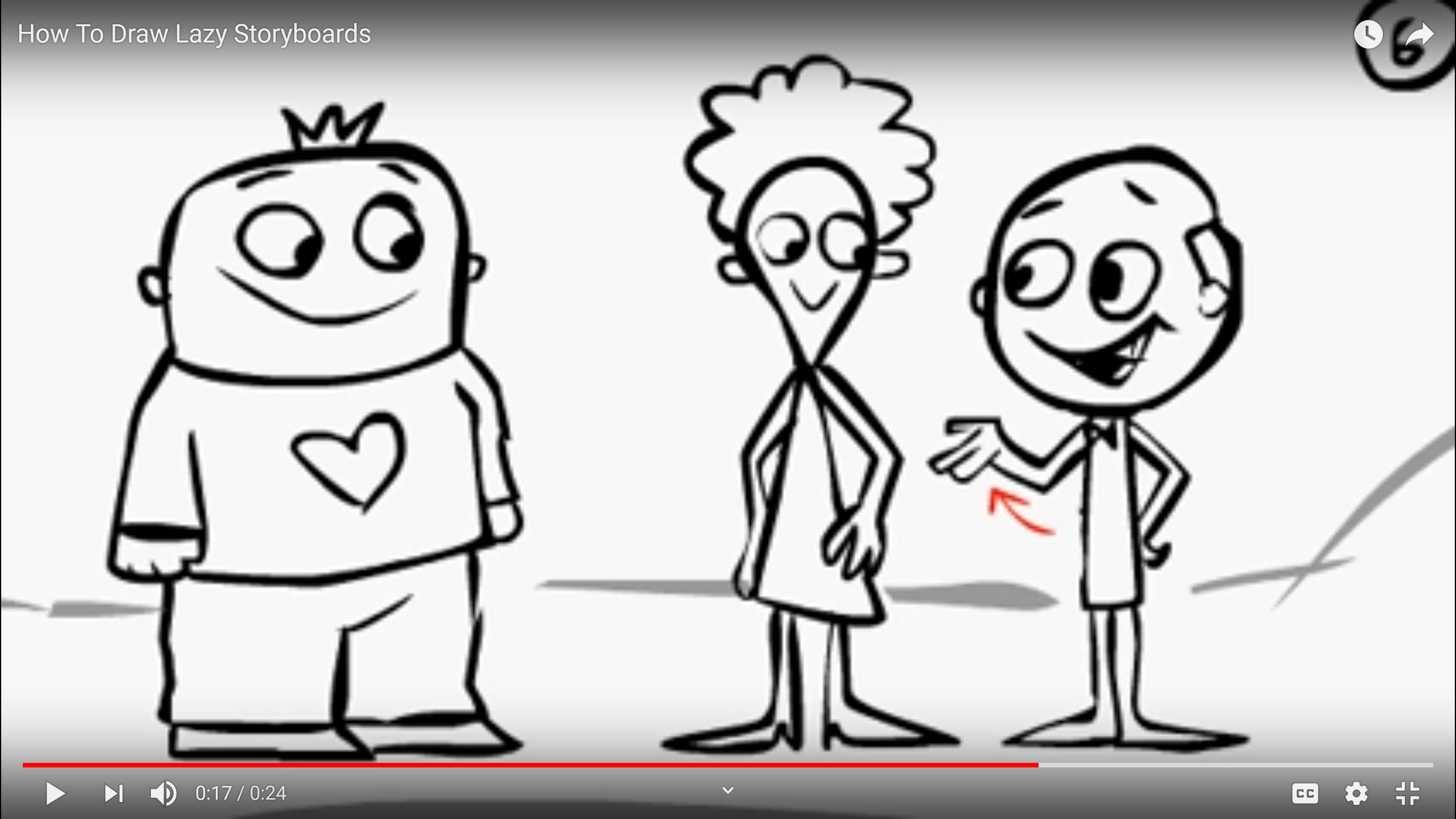 Clearly this gesture, used over and over, is meant to stand in for more appropriate ones, such as a subtle head tip, a furious fist waggle or a confused head scratch. Approximately ninety shots out of the 200 in the episode contain at least one beggar hand, and usually more. And there’d be even more of them if the characters didn’t happen to be holding objects in their hands at times.

I don’t mean to roast this one person. He or she (I don’t know who they are) are not the only one to do this. That’s the problem. Many board artists do the EXACT SAME THING constantly.

See, I’m not suggesting board artists hurt themselves trying to come up with a wacky, crazy gesture for every single line the characters say. I’m realistic about how TV cartoon production works. There’s a certain amount of “cheaping out”. Plus the scripts are often uninspiring. And I’ve been told “Why come up with elaborate, thought out acting for a scene when the animators are just going to do it their way anyhow?”

But we can think, just for a few moments, about what a character might do while they say a line of dialogue. Would they really hold their hand out in front of them? Maybe drawing a more appropriate pose, or not moving the character at all but drawing in a more apt facial expression would be the way to go.

True, the animators might not decide to use your acting, but the fact you put the effort in might at least cause them to think a bit harder themselves about what the character should be doing.

Let me state again that this artist’s drawings are good. Better than what I can do. When I draw boards, I don’t stay on model without great effort. My layouts are often not very good. My perspective drawing is garbage.

But I try harder when it comes to the acting, and as far as I know, the bosses above me and workers down the line appreciate it. When they’re not cussing me out for the lousy background perspective.

So please, storyboard artists: lose the beggar hand! And anyone else who’s privy to the board artist’s work on a production: when you see them draw a beggar hand, shame them into removing it. They’ll thank you one day!