First, something unrelated: in case you didn’t know, Tony Martin and guest writer Justin Heazlewood both have new writing on The Scrivener’s Fancy, a website which appears to have popped up out of nowhere to make me happy. Good for them!

I alluded in an earlier post to a “secret project”. There’s not really anything secret about it. The very important person I want to have involved in The Precinct is, clearly, John Farnham. 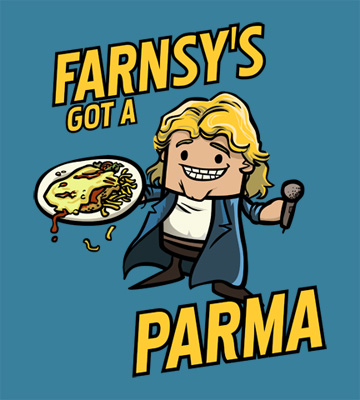 Maybe you’re wondering why. I’ll tell you why. First, watch these videos:

The man can sing absolutely anything! He is an astounding talent, and funny, too. I didn’t know until relatively recently that he’d sung songs for a number of American movie soundtracks in the ’80s, Fletch being the only one of these movies I’d actually seen.

Some of these songs aren’t that brilliant (that Fletch one in particular does nothing for me), but Farnham’s voice MAKES YOU BELIEVE! I can’t think of another singer who could sing the lines “black leather angels on a midnight ride / soft on the surface but trembling inside” and get away with it.

That’s why I wrote The Precinct‘s title song, “Blind Man’s Bomb”, with him in mind. It is my fervent hope that he’ll sing that theme song for my show. Also, I wrote him in as a character in the first episode, so it’ll bugger the script if he won’t do the voice. Because who can impersonate him? Nobody, that’s who.

So the “secret project” is a new short Precinct animation telling a bit more of the series’ story. Most of it will be montage, and that montage will be set to LRB’s “Playing To Win”.

I like how Good Friends turned out, but watching it back I feel like it’s not representative of the pace the show will have — The Precinct should move at a lightning clip. Lots of fast cuts. Tell the story quick!

My pacing is not such a problem, but I’m not always very dynamic in my camera setups and moves (I like long, locked-off camera mid shots), so I’m going to work extra hard to make this new animation punchy in that way.

And I’ll be animating John Farnham himself into it, singing the song. So I’m going to have to watch more of these clips. You know, to study his moves.