The title references my interior monologue when I consider what I should post about. I’ve been putting off talking much about the show because there’s always lots of small developments happening but rarely anything real big and awesome to talk about.

You can imagine it’s got to be tougher than ever to get an animated series happening nowadays, when whole state government departments are closing, beloved actor Charles “Bud” Tingwell has died and Seth McFarlane is the highest paid TV producer in history. It’s a strange, frightening world to live in.

Disturbing things in the animation industry lately. Our friend Gene over at Fatkat just shut his company down, and he’s not the only one having trouble by any means.

But over here at Cop Action Video (“No Overheads ‘Cause We Got No Employees And We Sleep In Our Studio”), we’re warming our hands over a flaming barrel, looking to the skies and plotting away. 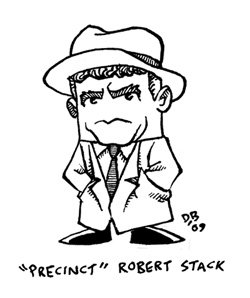 We’ve continued our cross-platform strategy planning. I’m really happy with the great ideas we’re busting out in our meetings over at Eskimo, so much so that I’m not even telling what they are. That’s right, they’re so bloody good, I’m keeping my fool trap shut so we don’t find out six months from now that Barbie.com stole them.

I continue to be a bit skeptical about TV networks, who, in turn, seem a bit skeptical about us (if they’re aware of us, that is). I’d love to say I’m expecting to grasp us fully to their bosoms, but they’re probably selling those bosoms at the moment to pay for more “reality” shows. This is more reason than ever to be thinking fourth-dimensionally, as Doc Brown says, and consider ways to (a) just go ahead and make your own animated series without massive cash injections, and/or (b) develop the series idea into something a more than a “TV show”, rather, into an interactive project.

I’m talking about the stuff I was proposing in this post. That’s what we’ve been planning. Only the new ideas have made it much more fun, interesting and — yes — interactive.

Adam and I are continuing to write episodes. These are going well, especially considered as first drafts (which they are), but we should be hoeing into them faster than we are. I especially have been slack, occupied with things like paid work, putting on comics events and doing wedding planning (if you didn’t know, I’m getting married to some hot chick).

Back to work now.